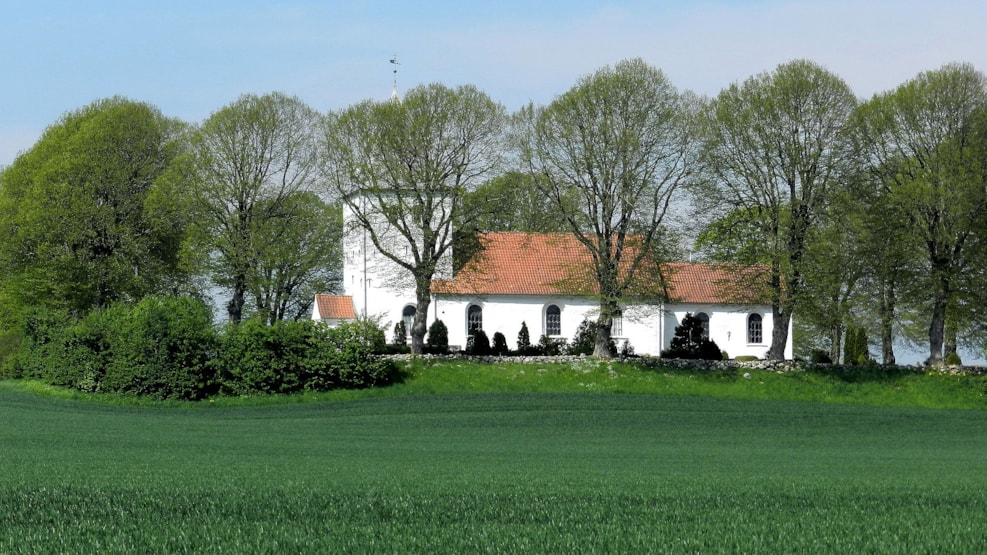 Moltrup Church is mentioned for the first time in 1460 and is the highest positioned church in Southern Jutland. The church is dedicated to Saint Chrysogonus, whom the residents of the parish always believed to be "Æ Krejselmand".

The church has two church bells, one of which was founded by Claus Asmussen in 1689. The legend says that during war, the bell had to be removed and melted into canons, which the residents did not particularly liked. Therefore, they removed the bell and put it in a waterhole in the village of Bramdrup. The waterhole was known was "Klokkedal" (bell valley) up until the 1960s. Today, there is a residential neighborhood called "Klokkedal" on the spot.

There is a figure of Saint Chrysogonus in the church, which was previously placed in a catholic altar. Originally, the figure has a sword in its left hand, but this was later replaced with a twisted cane, which makes him look more like a lord out on a stroll. The reason for the current appearance is most likely that the locals have always called the figure "Æ Krejselmand" - who, according to legend, was the lord of the medieval castle Krejsel. The castle most likely dates back to the early middle ages and today is preserved as a rampart in Krejsel Forest.

The church is usually open during daytime, but if not, access to the church can be arranged by inquiry to digger Jens Chr. Nørgaard Jensen tlf. +45 21 75 86 88.