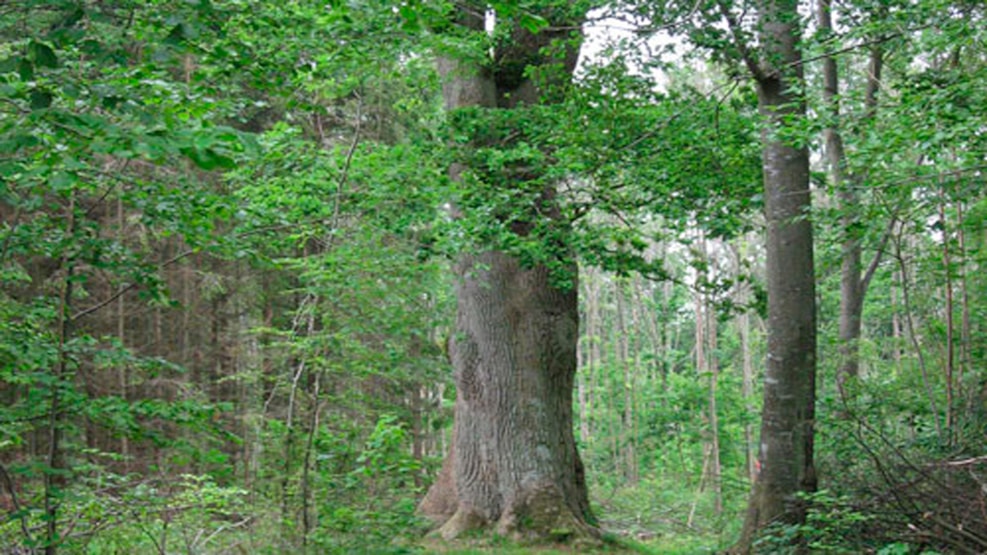 Remnants from the Second World War in the idyllic Østerskov.

Haderslev Østerskov stretches for around 186 hectares and is located around 3 kilometer north-east of Haderslev. Along with Vesterskov it is the remains of the much larger and partially cohesive mideaval forests stretching from the Little Belt to Christiansfeld and towards the north-east, the so-called Farris Forests. Østerskov is a protected forest (B-Forest) and is thus free from training exercises and orienteering. You can access the forest by car with a parking lot from the north and from Ladegårdshus from the south.

Østerskov is primarily dominated by beech, but at Gruskulevej in the northern part of the forest there is a section of oak trees more than 200 years old. At Østervej further to the south there is a 400 year old oak tree.

Østerskov has a marked trail of about 4,5 kilometers, and by following this trail you will pass most of the sights in the forest. You can see the trail here.

Østerskoven stands today as a memorial of the German occupation during the Second World War, as the Germans had a series of ammunition depots around Denmark. They were usually placed in secluded areas, so the damage would be minimal should they explode, and preferably in a forest so that the allies could not see the depots from the air. One depot was larger than all the others in Denmark; the depot in Østerskoven, which could hold no less than 5-6,000 tons of ammunition. During the clean-up in 1945 8-10,000 tons of ammunition was gathered from the forest. At Granvej in the northern part of the forest, there is an indentation in the ground from where, in 1944, around 400 stacked mines exploded.

The forest was fenced with barbed wire and a minefield, and over 200 ammunitionsites were established, including a series of small bunkers. In addition to this there were barracks for the staff of around 250 soldiers as well as small railways to transport the ammunition, both internally in the forest but also all the way to Haderslev station.

Today, Haderslev Østerskov is naturally cleared of explosives and the ammunition depots are removed and demolished. However, you can still see a number of fascinating remnants from the time. Amongst other traces, 3 brick bunkers and one of the railways have been preserved. On a few occasions, old ammunition has been found in the forest, even though all of the ammunition was supposedly removed and cleared.