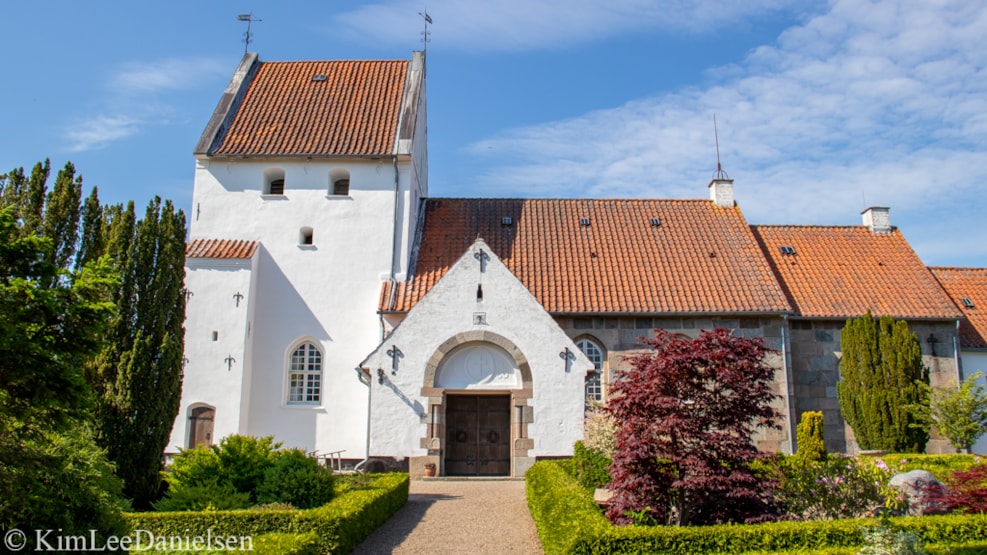 The trail begins at Bjerning Church, which dates back to around the year 1200. From here, you can either walk or bike through a part of the parish. The trail is app. 5 kilometers long.

From Bjerning Church the route continues towards Hovedvejen (The Main Road), past the thatched farm, which, for many years, was the parish community house. The route goes on, crossing Hovedvejen towards Åbrovej. In the middle ages, two parallel roads were formed next to the Ancient road through Southern Jutland. Åbrovej is part of an eastern road, which was called the Oxen Road because it was used to herd cattle. Before taking the turn towards Errested Kirkevej, you should continue south for a little detour; Here, the Oxen Road is not paved with asphalt and looks as it might have in the past, with growth and brush on both sides of the road.

Errested, which will be reached by walking down Errested Kirkevej towards Thomashusvej, has its own story in the middle ages. In the late 1500s most of Errested was owned by Duke and King and the future seemed bright, but in both 1627 and 1657 Errested was left desolate with fire and plundering, because of the 30 years war, where Christian IV was followed by mercenaries through Jutland after his defeat, and the famous was against the Swedish in 1657, where the Swedish crossed the ice in Copenhagen and Denmark famously lost Hallan, Blekinge and Skåne.

When you continue along Thomashusvej towards Hovedvejen, you can also see the field where the largest silver treasure ever found in Denmark was discovered in 2015; the coins were dated to around 1040, which means that at least one wealthy lord lived in the parish in the late Viking age.

The part of Hovedvejen, which you will follow on this trail, was made in 1855, after the need for newer and better roads became apparent in the 1700s. Back then, the main roads were calles Chaussees, as they were built after the French model. Until the South Jutland Motorway was completed around 40 years ago, largely all north- and south going traffic still happened on this road.

The last part of the trail is Kongevejen (The King's Road). All King's Roads were on Sealand, except for this one, which was made in 1585-1587 and went from Jelling past Kolding to Haderslevhus. It was one of three constructed by King Frederik II, making it one of the very first in the land. A King's Road was made by the King, for the King and the King only, or whomever he might allow to use it; The roads were locked with barriers and abuse of the King's Road was harshly punished.

The route runs along both asphalt, bicycle paths, field roads as well as the reopened church-path aka. the King's Road. You can travel both by foot and by bike on the entire route. For the sake of the nature and wild-life around the trail, dogs must be kept on a leash.